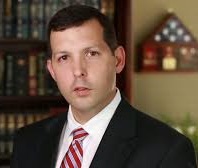 Attorney Garza grew up in McMinn County, Athens, Tennessee. He attended Vanderbilt University and received a Bachelor of Science in Psychology with a double major in Human & Organizational Development in 1996.

During Law School, Attorney Garza was commissioned as a Second Lieutenant in the United States Marine Corps in 1999.

He also served as a Martial Arts Instructor.

After his tour as a Judge Advocate in the Marine Corps, Mr. Garza formerly worked in the areas of personal injury, family law, and general civil litigation as a solo practitioner in Sevierville, Tennessee.

In almost all cases, Mr. Garza or one of his excellent legal staff will contact you within 12 hours to discuss your Tennessee DUI case and options with you FREE of charge. In most situations, a 15 minute phone conversation about your Tennessee DUI or drinking while driving related charge will enable Mr. Garza to give you a thorough preliminary evaluation of your DUI case, related Tennessee drunk driving charges, and options available.

Knoxville DUI lawyer Marcos Garza has been a SuperLawyer Rising Star 2010 through 2014, and has a rating of 5.0 out of 5 as AV-preeminent for his legal abilities and ethical standards by Martindale-Hubbell.

He has been featured in Time Magazine, Newsweek, and Forbes Magazine, is the author of several books on criminal defense and DUI defense, is a faculty member of Trial Skills University, and serves as Vice President for the DUI Defense Lawyers Association. Mr. Garza is also a graduate of the prestigious National Criminal Defense College in Macon, Georgia and Gerry Spence’s Trial Lawyers College in Dubois, Wyoming.

Mr. Garza is a graduate of the prestigious National Criminal Defense College Trial Practice Institute. He is one of only a few lawyers across the country that has been certified by the National Highway Traffic Safety Administration (NHTSA) to administer the Standardized Field Sobriety Tests (SFST), the same tests often administered by police officers prior to arresting someone for driving under the influence (DUI).

If you were arrested for a Knoxville DUI or the surrounding East Tennessee area, you want DUI attorney Marcos Garza fighting for you in court. He and his legal staff are very responsive to your needs and will be there for you each step of the way. A Tennessee DUI is a very serious charge, in order to successfully beat the case, you need a very serious Tennessee DUI lawyer on your side. Mr. Garza has successfully worked with Knoxville DUI prosecutors and judges and is very well-respected in court.

For a FREE Case Evaluation with a top DUI-DWI attorney, call or submit your case details. We are available 24 hours/7 days a week