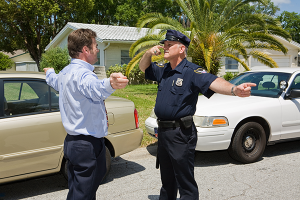 Standardized field sobriety tests are used as a way for police officers to evaluate if a driver is impaired. Guidelines were created by the National Highway Traffic Safety Administration (NHTSA) to help officers trained by the NHTSA to increase the accuracy in performing and evaluating the tests. Standardized field sobriety tests are typically administered and evaluated at the roadside before any actual arrest occurs and usually consist of three tests: horizontal gaze nystagmus (HGN), walk and turn, and the one-leg stand.HGN is the involuntary eye movement that occurs when the eyes move from side to side. This is also referred to as a penlight test because the officer asks the driver to follow a light with their eyes. After alcohol consumption, the eye twitching is exaggerated and could begin to occur to a lesser degree. The walk and turn and one leg stand are based on the driver’s ability to follow instructions at the same time they are performing simple physical tasks. As these are being performed by the driver, the officer is looking for clues and indicators of impairment based on their NHTSA training. It should be noted that some law enforcement officers do ask the driver to perform other tasks to determine sobriety, which could include reciting the alphabet, counting, closing eyes, and touching the nose, among others.

Field sobriety tests are voluntary, but refusal to submit to a state-administered chemical test to determine blood alcohol content could carry serious penalties in addition to any possible criminal charges.