Most DUI drug statutes contain provisions making it illegal to drive a vehicle while under the influence of drugs. In many statutes, the term “controlled substance,” “impairing substance” or “intoxicating substance” is substituted for the term “drug.” Statutes making it illegal to drive while under the influence of drugs are generally interpreted and applied in the same manner as drunk or impaired driving statutes, except that the presumptive statutes do not apply. Unless an applicable statute contains a restrictive definition of the term “drug,” the term is likely to be given a broad definition by the court. 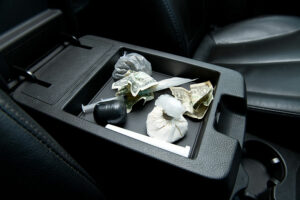 One example is a case in which toluene, a substance found in paint vapors, was held to constitute a drug for purposes of driving while under the influence of drugs statute. Additionally, there has been instances in which medically prescribed insulin was held to be a drug. If a defendant is charged with the offense of driving while under the influence of a controlled substance, there must be evidence of either consumption of the substance by the defendant or the presence of the substance in the defendant’s body.

Other courts have held that the fact that the use of a drug is medically required is not a defense to a charge of driving while under the influence of drugs under any circumstances. Several states have enacted statutes providing that the lawful or prescribed use of a drug is not a defense to a charge of DUI drugs. If you were arrested for DUI due to drugs, don’t wait to find out how a highly-specialized and veteran DUI-DWI lawyer can fight charges against you. TeamDUI.com attorneys near me can be reached 24 hours per day, 7 days a week at 844-832-6384. Contact us for more information, free case analysis, and to discuss our legal services.

Related Articles
Summary of DUI Defenses
Legality of the Stop
Articulable Suspicion
Ways to WIN or Reduce Your DUI Case
Choosing A DUI Lawyer
Contact Us
For a FREE Case Evaluation with a specialized DUI-DWI attorney, call or submit your case details. We are available 24 hours/7 days a week.