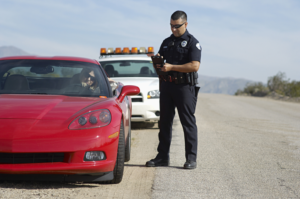 Some courts recognize that the presence of a law enforcement officer “tailgating” you, or aggressively approaching your vehicle rapidly from the rear, can lead to momentary lane violations, or you repeatedly checking on the officer in your rearview mirror. This may reasonably cause you to weave while trying to drive lawfully. DUI illegal stops can be defeated by a top-ranked DUI attorney!

Some states have held that weaving caused by the officer’s goading or “threatening driving conduct” by itself does not establish an articulable suspicion of a crime. Your temporary erratic driving does not give police a legitimate basis to stop you and subject you to a search and seizure – unless the other movements of your vehicle are also unsafe. Seasoned DUI lawyers have seen hundreds of similar DUI illegal stops cases.

Brief lapses of not staying in your lane are not necessarily violations of the law, in most jurisdictions. Some states like Georgia seem to ignore the majority rule and permit virtually any claimed lane touching to support a police pullover. If aggressive moves by the police car behind you triggered your errant driving, and this weaving was the officer’s only reason for stopping you, it is possible that (with the proper proof) the court will declare the stop “unjustified”. At that point, a judge may not allow any evidence against you that arose out of this stop.

Your DUI lawyer will likely address this improper police conduct by filing a pre-trial motion to ask your judge to make a ruling that the officer’s driving behavior CAUSED your alleged driving error. This issue could terminate your prosecution if the judge is convinced that the instigating event was a law enforcement officer taunting you.

Most DUI arrests today are captured on police car video or body cam video. This DUI video may be the critical item of evidence used by your DUI attorney to prevail in a suppression motion, based upon an illegal traffic stop.

Related Articles
Nonconsensual Blood Sample
DUI Blood Tests
Implied Consent
“Per Se” DUI
Contact Us
For a FREE Case Evaluation with a specialized DUI-DWI attorney near me, call or submit your case details.  Call and find out how our knowledgeable DUI legal services and help you today. We are available 24 hours/7 days a week1-844-TEAM-DUI (1-844-832-6384)